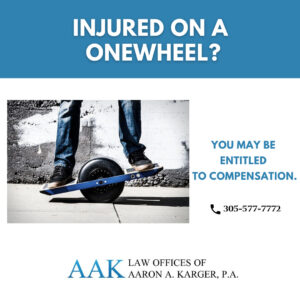 Future Motion, Inc.’s motorized battery-operated skateboard known as the Onewheel has made headlines recently as many riders have suffered serious and life-threatening injuries as a result of alleged defects in the device. Onewheel devices, marketed as being adventurous and awesome, have resulted in a series of nosedives, crashes, and even deaths that have caused severe pain and permanent injuries to riders and their loved ones.

The Law Offices of Aaron A. Karger is currently handling claims against Future Motion, Inc. on behalf of riders who have suffered permanent injuries as a result of Onewheel’s alleged defects.  First released in 2015, the Onewheel device appeals to thrill seekers and skateboard enthusiasts who must rely on the device’s battery power to propel them forward on a skateboard-deck attached to a single tire. Riders must use balance and care while operating their Onewheel, just like skateboarding or surfing. Like other sports, riders assume the basic risks associated with this kind of activity – however, that does not include the risk of operating a defective device.

The injuries sustained by Onewheel riders are consistent and most often times follow the same type of fall from one rider to the next. Riders report an abrupt motor shut-off as they are riding, resulting in a nosedive that ejects them off their Onewheel and violently to the ground. The Onewheel nosedive can occasionally be a result of the device feature known as pushback. When the pushback occurs however, the nose of the board will slightly lift up to indicate to the rider that it is reaching its limitations in speed, steepness or battery level. At this point, the rider may struggle to balance, and the device could shut down entirely, resulting in the nosedive. While the pushback may serve as an indicator to exercise caution, it is not a sign that the device will entirely power off.

Reaching speeds of up to 20 mph or more, a sudden Onewheel shut down can cause life-threatening injuries. While some believe that they can avoid a nosedive or sudden shutdown by merely slowing down after the pushback, not all riders who have experienced the nosedive have first been prompted by a pushback. Some riders report a sudden shutdown with no warning. Ultimately, no rider willingly accepts the risk that their device will shut down mid-ride. The risks associated with riding a Onewheel are misleadingly advertised on the Onewheel webpage, stating that “ignoring safety warnings, including pushback, may result in loss of control, serious injury or death.” This statement neglects to account for the possibility of a motor shut-off that can occur with or without an initial pushback. Future Motion, Inc. has a responsibility as the manufacturer to warm Onewheel riders of all possible risks, including the motor shut-off that is occurring at rising numbers and endangering riders.

The resulting injuries from Onewheel nosedives vary from broken bones to brain injuries and can be so severe they lead to death. At least three deaths have occurred because of a Onewheel nosedive, resulting in wrongful death lawsuits in California and New York filed against Future Motion, Inc. Other lawsuits claim personal injury due to a design flaw.  The abrupt motor shut-off is not only dangerous and indicative of a product defect, but also not a risk that was assumed when the rider purchased the device. If you or a loved one have suffered injuries from a Onewheel nosedive you may be entitled to compensation and should seek immediate medical help and legal advice.

If you or someone you know has been injured on a Onewheel, please contact us at 305-577-7772. All case consultations are free and confidential.